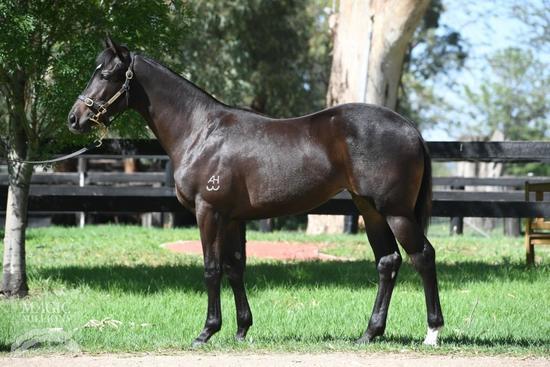 Sire: So You Think Dam: Daytime

Filly by Champion racehorse and now successful sire - SO YOU THINK


SO YOU THINK requires little introduction to Australian racegoers. The winner of no less than two Cox Plate’s [G1], SO YOU THINK won 10 Group 1’s across 2 hemispheres, beating 75 individual Group 1 winners and amassing almost $9m. in prizemoney. Crowned 3YO Champion Australian Colt and Champion Miler the following year, SO YOU THINK’s 133 Timeform rating makes him the highest rated Australian colt of the modern age.

At stud SO YOU THINK has delivered, producing 37 Stakes performers including 5 Group winners, the most recent of which, NAKEETA JANE, saluted last month in the G1 ATC Surround S.

This filly hails from a strong black type family that includes EXOSPHERE, the highly rated winner of the Group 1 Golden Rose [G1] (in record time) and now Freshman sire whose progeny have commanded up to $350K in the ring this year.

This is the second foal for Choisir mare DAYTIME. Gai Waterhouse trains the Lonhro ½ sister who has recorded two recent impressive trial wins but is as yet unraced.

The second dam of this filly, HIGHEST, was a Metropolitan 2YO winner who also placed in the time-honoured AJC Widden Stakes [G3].

With black type littered throughout the first three generations of this filly’s pedigree, it is an impressive running pedigree. SO YOU THINK progeny consistently average over $100K at sales Australia-wide so come join pone of South Australia’s Leading Trainers and race this beautiful filly at this very appealing price.

“This filly possesses all the attributes I look for when selecting a racehorse: depth of girth, deep shoulder, strong hind and good temperament. She appealed to me as a sharp running-style of horse and I have nominated her for the lucrative Magic Millions Race Series which includes the $200K 2YO Classic in Adelaide next year, the Golden Slipper and Blue Diamond Stakes,” Mark Minervini

5% Shares only $2500
(includes breaking and agistment to 30th June, Magic Millions bonus series nomination as well as insurance for 12 months).
Trained by MARK MINERVINI
at Morphetville