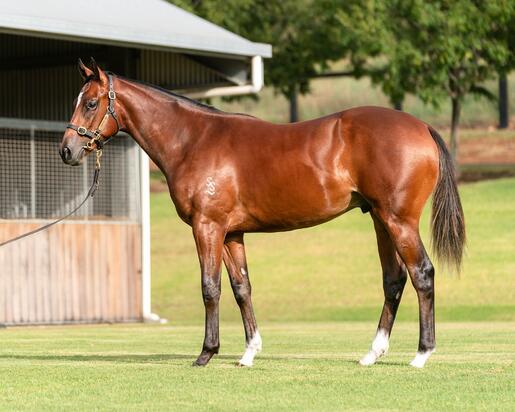 Star galloper High Chaparral has been doing a mighty job as a sire of sires and one of his shining lights is Dundeel - the high class racehorse who was seen at his best winning six Gr.1 races... the ATC Derby, the Spring Champion Stakes, the Rosehill Guineas, the Randwick Guineas, the Underwood Stakes (his memorable clash with Atlantic Jewel, imposing on that great mare her one and only defeat) and the Queen Elizabeth Stakes.

Winning ten of his 19 starts (placing on a further five occasions) and amassing in excess of $5.3 million in stakes, Dundeel has understandably proven consistently popular since he retired to Arrowfield Stud in 2014 and what a terrific job he is doing.

Three times crowned Australian Champion Sire with his impressive tally of 179 stakes winners, the four times Gr.1 winner Redoute's Choice - the mighty Danehill's most successful sire son - is also doing the job as a broodmare sire and he is the sire of this exciting colt's dam.

Not once in five seasons has he finished out of the top two in the Australian Champion Broodmare Sire charts - taking out the title for the 2018/19 and 2019/20 seasons and once again leading the way this year.


Redoute's Choice's daughters have already produced 130 stakes winners with 25 of those talented gallopers being Gr.1 winners - including current star three-year-olds Hitotsu and Anamoe and the outstanding stallion Zoustar.

As well as the Gr.1 Caulfield Guineas winner Super Seth (now proving popular at stud in New Zealand) - one of the 23 winners by Dundeel out of Redoute's Choice mares.

This colt is the first foal for a good race mare - Awake The Stars being a six times winner who was also six times placed from her 26 starts, winning over $165,000 in prize money.

Adept on any sort of going, Awake The Stars was a 1400m specialist who had good natural pace. And judging by the quality of her first foal she is in for a successful career as a broodmare - her owners continuing to send her to high class stallions with her latest foal being a colt by Pierata.

Awake The Stars (who was raced by Segenhoe Stud after they elected to pass her in for $425,000 at the 2015 Inglis Easter Yearling Sale) is the first foal produced by the lightly raced but talented My Chicharita who won three in a row at three - including the Gr.2 Royal Stakes.

A fast finishing and somewhat unlucky fourth from a horror gate taking on the boys in the Gr.1 NZ Derby won by Silent Achiever, My Chicharita is still at stud - served last spring by King's Legacy.


My Chicharita is a daughter of the Eagle Farm winning Sir Tristram mare Trisynd whose dam is the terrific mare Swiftsynd - winner of nine races including the Gr.3 Great Western Stakes at Flemington.
Nine of her foals were winners including the five times Group winner Le Zagaletta (successful at 14 of his 65 starts - filling placings on another 20 occasions) and she is also ancestress of the stakes winners Run Red, Magneto, Sweet Leader and Leeds. Swiftsynd's dam Candysynd by the legendary Gunsynd was also a high class broodmare - also producing the Gr.2 Villiers Stakes winner Spot The Rock and the dual Listed winner Candy Rock.

This colt boasts an interesting pedigree with a 4 X 4 cross of the great Sir Tristram a highlight - noting that seven of Dundeel's stakes winners including the Gr.1 winner Truly Great - are line-bred to him.

Purchase price includes training and agistment to 19.1.2023, Inglis bonus series nomination, breaking in as well as insurance for 12 months from purchase date.