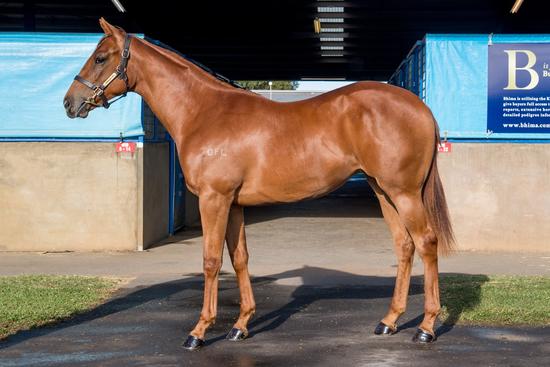 A Champion 2YO AND 3YO Colt of his generation, STAR WITNESS won his first three starts as a 2YO including the G1 Blue Diamond. Victorious in the G1 Coolmore S. as a 3YO, STAR WITNESS was retired to the famed Widden Stud as a 3YO with a record of 4 wins and a further five placings at Stakes level.

GABRIELLA, the unraced dam of this filly is a half sister to multiple Group 1 winning CAPE OF GOOD HOPE as well as Group 3 winner NEPHRITE. GABRIELLA has a perfect record at stud with 7 winners from as many to race including dual South African G3 winner TABLE BAY who won 3 races as a juvenile.
Possessing an all-important relaxed nature, this filly looks strong through the hindquarter and has a lovely, loose walk. She boasts a good, running pedigree with a lot of 2YO form. She certainly looks a racehorse and may go early. One of our top picks at the sale, this stunning Chestnut filly ticks all the boxes for us.

To be trained by CINDY ALDERSON
at Cranbourne
2.5% shares $2695 inclusive to 30th September 2020
(includes breaking and agistment to 30th September, Inglis Bonus Series nomination as well as insurance for 12 months).