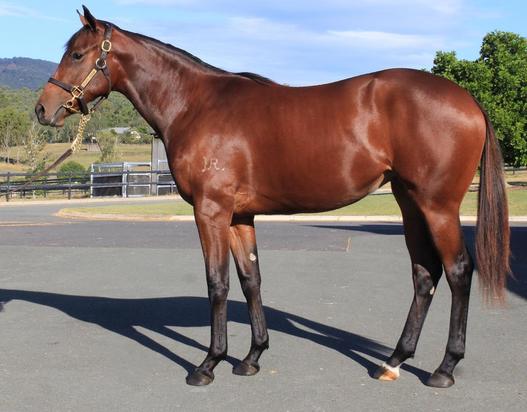 HURRY - only 5% remaining!
A son of Champion sire FASTNET ROCK, dual hemisphere sire FOXWEDGE went back to back on debut as a 2YO before finishing 3rd in the Golden Slipper lead-up G2 Todman Stakes behind SMART MISSILE and SEPOY. At 3 he won the Group 1 William Reid Stakes, beating older horses and Champions HAY LIST and BUFFERING.


FOXWEDGE then won the G2 Roman Consul Stakes, a race won in the past by the likes of EXCEED AND EXCEL as well as his own sire FASTNET ROCK. Following this he claimed victory in the Group 3 San Domenico Stakes having placed in the Group 1 Newmarket Handicap and Group 1 Coolmore Stud Stakes.

The highest rated son of FASTNET ROCK, FOXWEDGE achieved one of the highest ever first season sales averages at Magic Millions (an average of $157K), more than 5.5 times his service fee. Since then his yearlings have sold to $560K. Purchased by some of the biggest stables in the country and coupled with a move to Victoria, FOXWEDGE has been given the opportunity to succeed – and his statistics as a young sire impress.
FOXWEDGE already has 44 Stakes performers internationally on his resume (8.5% stakes horses) with his oldest progeny 6YO’s, earning him the title of Champion 2nd Season Sire. One of twenty sons of FASTNET ROCK at stud, FOXWEDGE is the only active stallion to produce three or more individual Group1 winners.

This filly is the first foal for 4-time winning Starcraft mare STARETTO. Second dam, UNVEIL is the dam of four winners at the track including 8 time winner and stakes placed Arowana Dot Com. UNVEIL is also half-sister to VRC Sires’ Produce[G1] winner PILLAGING and a direct descendant (4th dam) of Champion Filly and blue hen mare STAGE HIT.
This filly is currently being broken in and, at this price, shares won’t last long.

Contact Chris Dickinson on 0419176992 or chris@clanbrooke.com
A copy of the PDS can be obtained by emailing admin@clanbrooke.com.
Clanbrooke Pty Ltd – AFSL #260214.