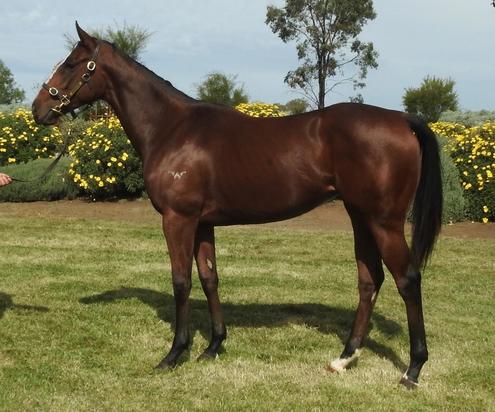 Winning on debut as a juvenile for trainer Graeme Begg, WRITTEN TYCOON scored his biggest victory in the G2 Silver Slipper Stakes, beating the likes of DOMESDAY, FLYING PEGASUS and JET SPUR to victory. In his Classic year, WRITTEN TYCOON was runner-up to MEDIA in the G2 San Domenico S., with SNITZEL third and STRATUM 4th.

Crowned the Leading Australian First Season sire in 2010-11 and then Leading Australian Sire of 2YO’s in 2015-16, WRITTEN TYCOON now has 58 Stakes winners including 8 G1 winners to his name (no sex bias with four male and four female), boastingan impressive 73% runners-winners ratio.

PROMISE ME NOTHING, the dam of this filly, has two winners at the track, whilst Stakes winning second dam PROMISE ME (SAJC Classic Mile [L]) has five winners including the stakes performer Lady Mahler and is a half-sister to the 8 time winner RUSSIAN PEARL (Levin RC Bayer Classic [G1]). This is also the family of Champion NZ 3YO Filly EASTERN JOY.

At the 2020 Gold Coast Magic Millions, WRITTEN TYCOON progeny sold to $1.5m (a filly out of Karuta Queen) and averaged $270K. This is an opportunity to race a daughter of the Champion sire at a very appealing price.
. Both Mark Minervini and Clanbrooke are retaining shares in her.

Contact Chris Dickinson on 0419176992or chris@clanbrooke.com
A copy of the PDS can be obtained by emailing admin@clanbrooke.com.
Clanbrooke Pty Ltd – AFSL #260214