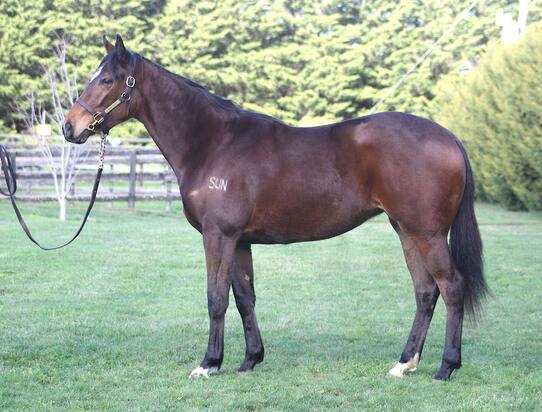 The best performed son of TEOFILO at stud in Australia, PALENTINO was victorious in the stallion-making Australian Guineas [G1] in his Classic year, beating home a swathe of Group 1 winners including TARZINO and RISQUE. PALENTINO went on to emulate the late, great ZABEEL in the G1 double when he won the former Craiglee S. [G1], now known as the MAKYBE Diva S. [G1].


Bel Esprit mare VAIN ATTRACTION, the dam of this filly, was a city winner on no less than four occasions. Second dam, CENTENNIAL (Counties Challenge S. [L]), a daughter of the six-time Champion New Zealand Broodmare Sire, was a 2YO winner herself and has produced 8 winners at stud. Third dam, Stakes winning LIGHTNING TREE (CJC Warstep S. [L]) produced a Stakes winning daughter in BRIANNA (Counties Bowl [L]) amongst her 6 winners.

Selling to $160K (over 9 times his Freshman years’ Service fee) and averaging $108K at this year’s Inglis Melbourne Premier Sale, PALENTINO Yearlings have been very well received. This lovely walking filly with deep girth and great attitude has been broken in and there is no more to pay until 1st October 2020.

PALENTINO progeny are yet to race but if the quality of his Yearlings are anything to go by, he could be standing for a whole lot more in a couple of years’ time. At this price, this filly represents terrific value.
5% shares $1190
(includes breaking and agistment to 30th September 2020).
Trained by ANDREW DALE at Wangaratta.