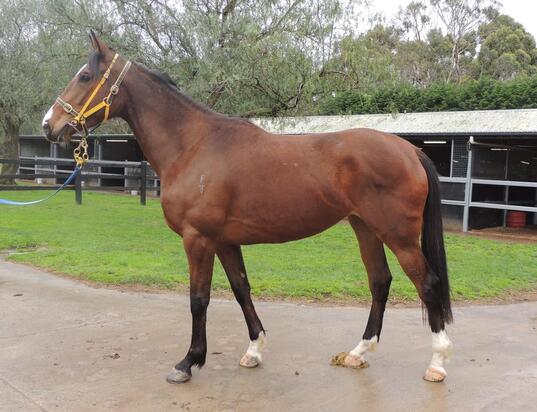 By speed machine NORTHERN METEOR out of Oaks winning dam IRISH DARLING, FIGHTING SUN was unbeaten at his only two lifetime starts. Winning the Listed Canonbury Stakes, injury cut his career short before he had a tilt at the Golden Slipper for which he was high in betting. FIGHTING SUN was retired to Sun Stud at only 2.


FIGHTING SUN progeny were received well and have sold to $220K. Crowned Champion First Season sire in 2017/18, FIGHTING SUN is renowned for breeding tough horses who make it to the races.

Lakemba Gold, the dam of this filly, was a city winner, victorious on 8 occasions. With a perfect record at stud (4 winners from 4 to race), her progeny boast 19 wins between them. MISSION TYCOON (Sha Tin Hong Kong Classic Cup [L]) has done a great job since relocating to Hong Kong whilst Written Gem won 4 of her 13 starts for the Jason Warren stable before retiring as a broodmare. Aurum Spirit (8 wins) and Gold Fontein (3 wins), both city winners, give an indication of just how prolific a producer the dam is proving.
The filly has been broken in and has arrived at Jason Warren’s property. He has been most impressed with her physique and fees she looks a real runner.

This is a terrific running family and, knowing the family, this filly will be given every opportunity at the Jason Warren stable.
Ingoing fee per 5% share only $750
(includes breaking and pre-training to 30th September).
Trained by JASON WARREN at Mornington (Tuerong)
Lessees receive 80% net prizemoney.
Lease is for 3 years.